You are here: Home / Desserts / Paleo Peach Blueberry Crisp with Basil-Infused Whipped Coconut Cream
I had an abundance of peaches this weekend, so I decided to make a crisp! I also had a ton of basil from my little garden and a couple pounds of blueberries, all a great combo.
My family loves peaches. Especially my older sister Serena. She hardly eats anything sweet, but when it comes to peaches, berries, or fruit in general she will definitely try whatever dessert I make, which is a rarity. 😉 She really liked this crisp and so did the rest of the family! Definitely a keeper recipe and perfect for the summer.
Not only is this lovely Peach Blueberry Crisp paleo, it’s also gluten-free, vegan (use maple syrup or agave nectar instead of honey), and refined sugar free! And the basil-infused whipped coconut cream is AMAZING.
Healthy and delicious?! Check it out.
Paleo Peach Blueberry Crisp
with Basil-Infused Whipped Coconut Cream
Serves 6-8
Original recipe found on Pinch of Yum 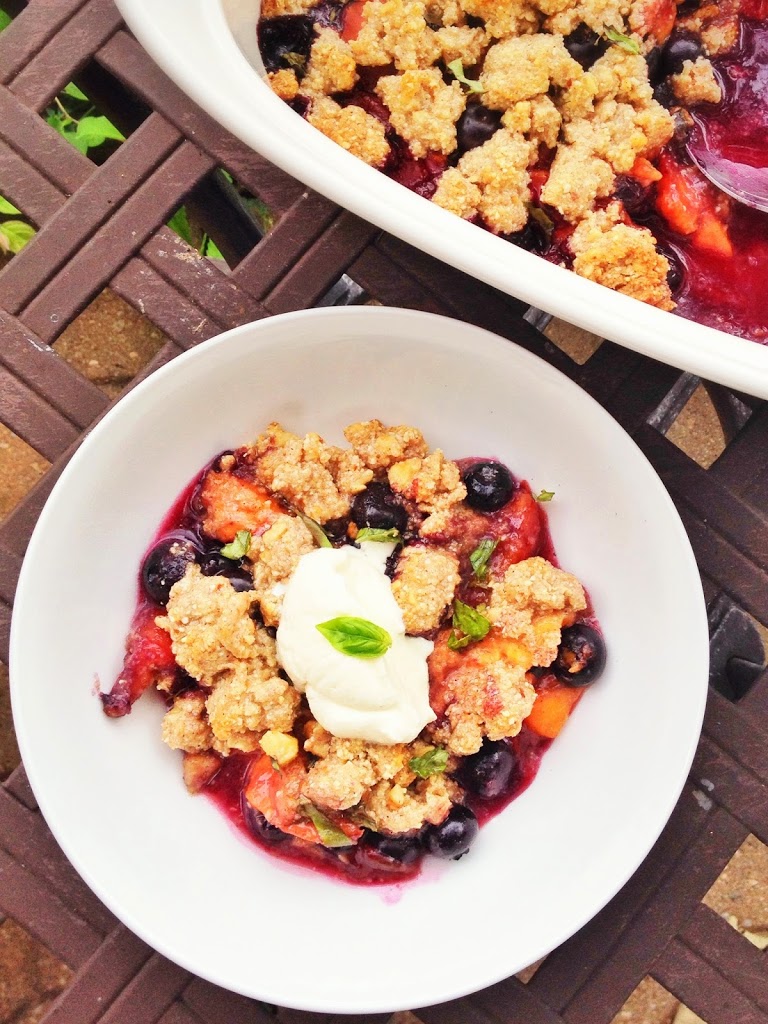 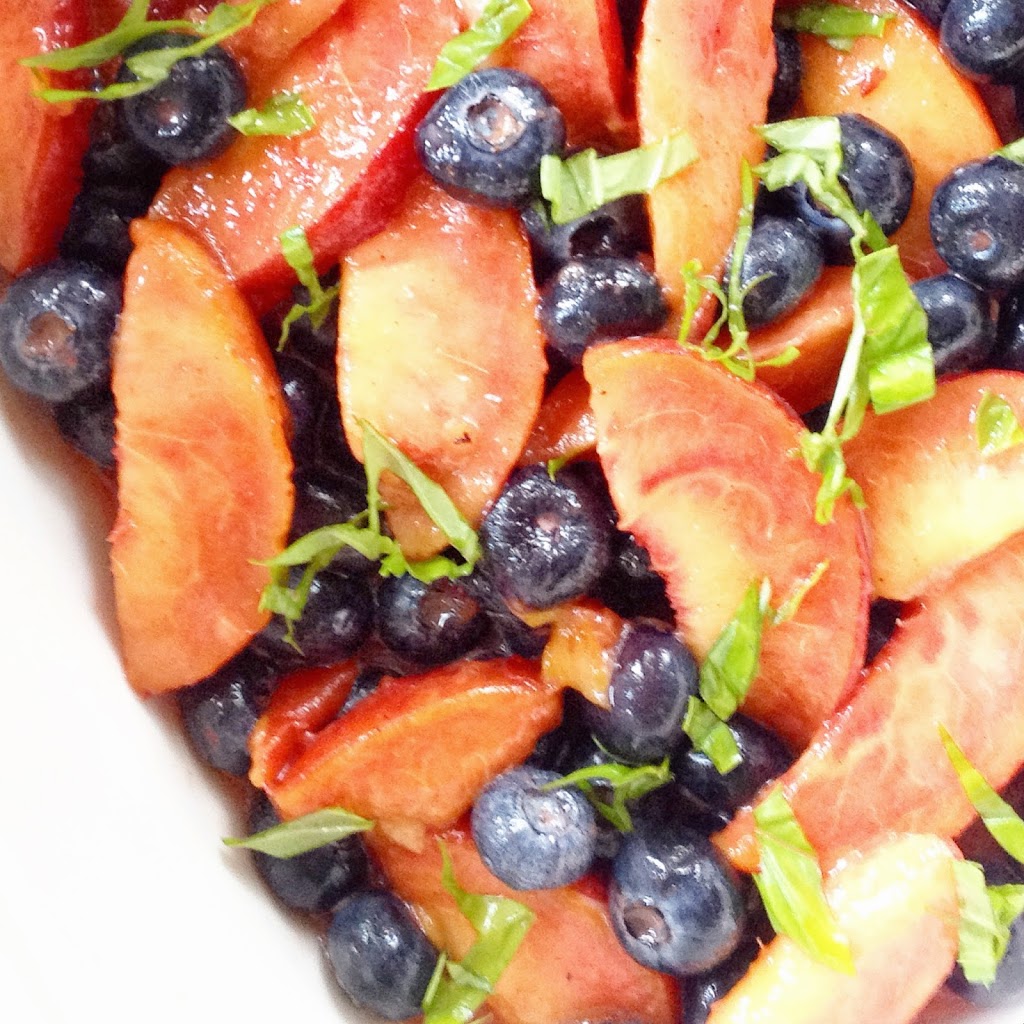 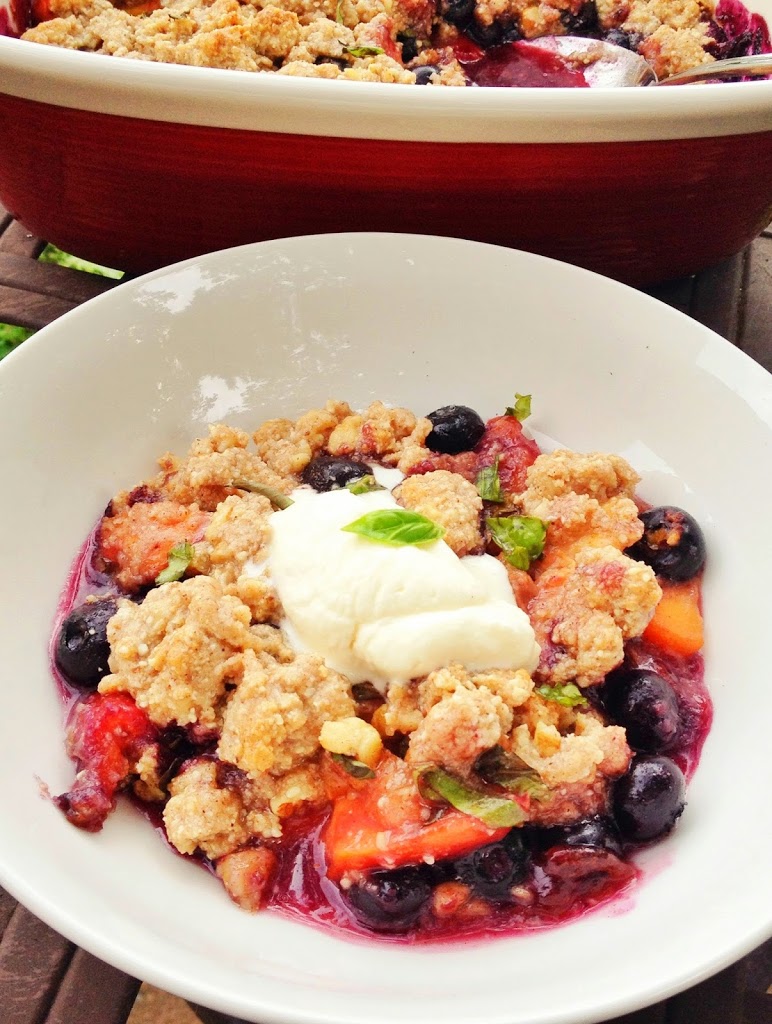 Ingredients
Fruit mixture-
2 cups peaches, sliced
2 cups blueberries
1 tsp lemon juice
5 TB honey, maple syrup, or agave nectar as sweetener
3 medium basil leaves, thinly chopped
pinch of salt
1/4 tsp cinnamon
2 TB arrowroot flour (used as thickener)
Topping-
1/2 cup walnuts, chopped
1 cup almond flour
1/4 cup cashew flour (you can also use ground cashews or coconut flour)
1 tsp cinnamon
1/4 tsp salt
1/4 cup honey, maple syrup, or agave nectar as sweetener
4 TB coconut oil
Basil-Infused Whipped Coconut Cream-
1 can full-fat organic coconut milk, refridgerated overnight
1-2 TB honey, maple syrup, or agave nectar as sweetener
3 medium basil leaves
1 tsp vanilla
Basil leaves for topping, optional
Directions
Grease a casserole dish or skillet and preheat oven to 350 degrees F.
For fruit- Mix blueberries and peaches with lemon juice, sweetener, basil, salt, cinnamon, and arrowroot in a medium sized bowl. Set aside.
For topping- Mix nuts, flours, cinnamon, salt, and sweetener in a medium mixing bowl. Cut in oil with a pastry cutter, fork, or hands until the mixture begins to form crumbs.
Pour fruit mixture in your dish, and crumble the topping over the fruit. Bake for 25 minutes, or until topping is browned and fruit is bubbling.
For whipped coconut cream- Gently open your can of refrigerated coconut milk and scoop the coconut cream on top into a mixing bowl, stopping when you reach the water at the bottom. In mixing bowl on high speed, whip the coconut cream for 3 to 5 minutes until it becomes fluffy and light with soft peaks. Mix in the sweetener, vanilla, and whole basil leaves. Try to crush the basil leaves into the cream to bring out the basil flavor. Let the cream sit covered in fridge for 15 minutes, then take out the basil leaves and serve on top of crisp.
Enjoy!
What is your favorite fruit desserts during summer?