You are here: Home / Book Reviews / REVIEW: A Promise to Protect by Patricia Bradley 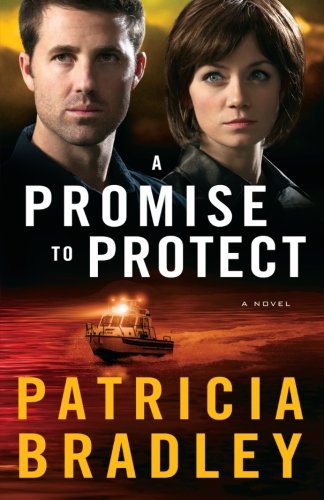 In a steamy small town riddled with broken promises, one woman’s secret could change everything.

Acting Sheriff Ben Logan hasn’t heard from Leigh Somerall in a very long time, but it doesn’t mean he can get her–or their whirlwind romance of ten years ago–out of his head. When she calls out of the blue, it is with a strange request to protect her brother, Tony. But all too soon, Ben is charged with a different task–protecting Leigh from the people after her brother. With Leigh doing everything in her power to avoid Ben, it’s no easy task. And the secret she is keeping just may change their lives forever.

My Thoughts:
Dr. Leigh Somerall and her nine-year-old son moved back to Logan Point in order to be with her brother Tony and pay off her student loans, but that doesn’t mean she plans on staying. When Tony gets involved in something dangerous, she reaches out to acting Sheriff Ben Logan for help. Ben hasn’t heard from Leigh in ten years, but that doesn’t mean he’s forgotten her or their summer romance. When tragedy occurs, Ben must fight to keep his promise to Tony and protect Leigh. But secrets and lies from years past have Leigh trying to avoid Ben and his family at all costs—making his job very hard. Can they figure out who is after her and why? And will Leigh finally share what caused her to leave Logan Point all those years ago?

A Promise to Protect is a fast-paced suspense novel containing murder plots, car bombs, kidnapping, criminal rings, secrets uncovered, and a love triangle. This was my first experience with this talented new author—her only previous work being the first in this series, Shadows of the Past. I have to confess that I didn’t even know this was the second book until I started reading, which is something that happens to me quite often. *smacks forehead* So I was especially happy to find out that this book works perfectly as a standalone as well! I’ll start with the high points of A Promise to Protect—it had a solid plot, fun twists and turns, and a really easy writing style. But while I enjoyed the story, it just felt like something I’d read before. The characters and romance were both a bit mediocre and I predicted the ending from a mile away. That being said, all-in-all I ended this book with a happy smile and am interested to see what’ll happen next in Logan Point!

If you enjoy authors such as Sandra Orchard, Lisa Harris, and Lynette Eason then you should check out this series. Overall, I liked it and would recommend for romantic suspense fiction lovers!

**I received this book from the publisher in exchange for my honest review. My sincerest apologies to the publisher and author for my delay in reviewing.