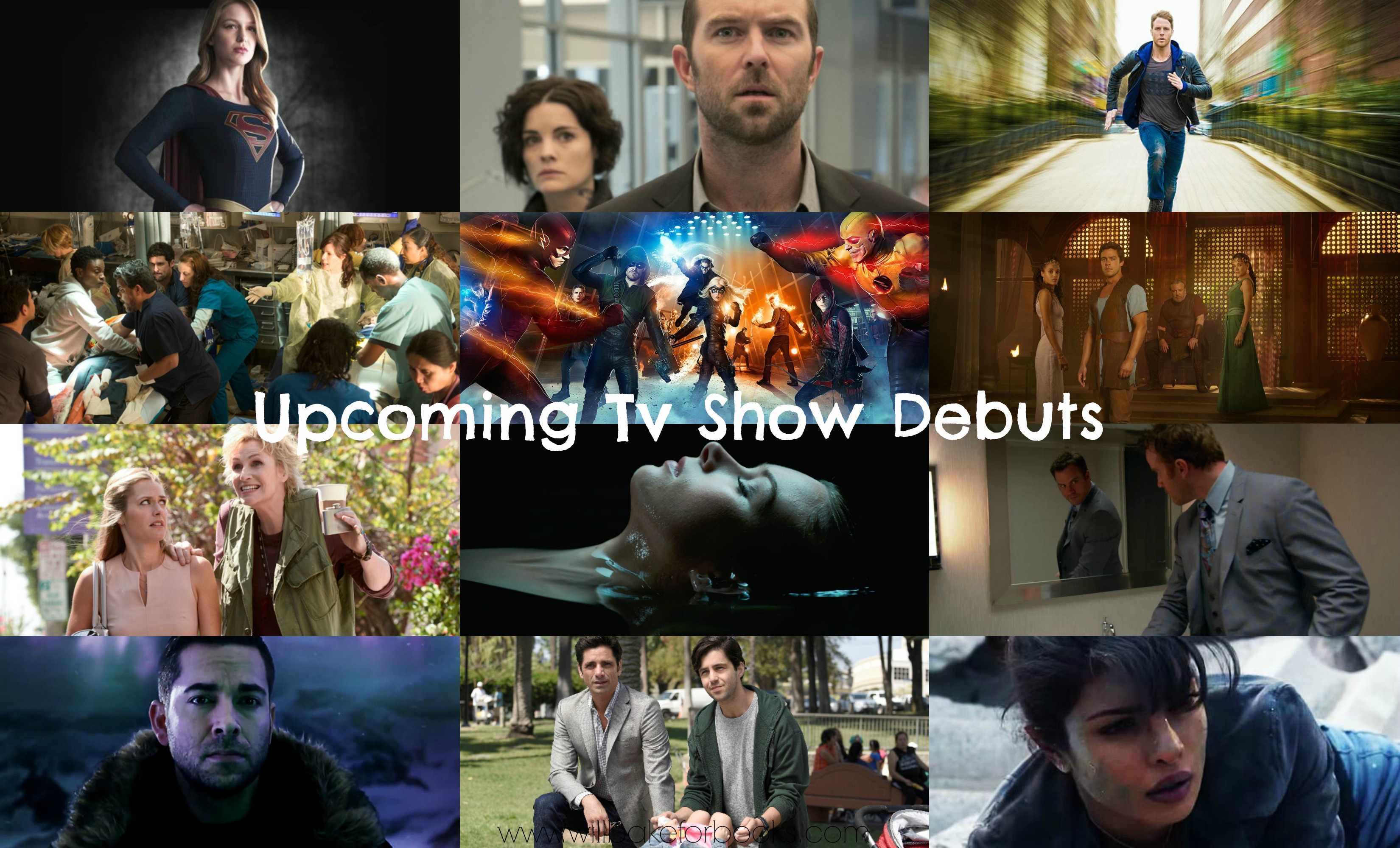 Happy Friday, ya’ll! If my previous posts have been any indication, you might know by now that I’m a pretty serious tv junkie. Usually I’ll share tv favorites or upcoming show trailers in a Top Ten Tuesday or Trailer Tuesday post, but alas- it is not Tuesday. So a random post on a Friday it is! 😉 With all the upfront trailers releasing, I just had to share a few (okay, a little more than a few) I was excited about. I don’t know if I’ll necessarily watch all of these shows (there are just way too many) but here are the ones I thought looked pretty interesting. Hope you enjoy watching these fun trailers!

DC’s Legends of Tomorrow (The CW)

I’m a HUGE Arrow and Flash fan, so another DC Comics show is very welcome. Looks really cool and different with the time travel to the future (with Star Wars type weapons!!) and criminals becoming heroes. And (spoiler alert!) Sara is back from the dead…again?! Debuting in 2016.

“A young woman is recruited into a secret government agency to be “stitched” into the minds of the recently deceased, using their memories to investigate murders.” ABC Family has NOT been my favorite network for tv shows lately, but this trailer makes me want to give them another chance. I have a feeling it could be as good as Kyle XY. Coming June 2.

“A diverse group of recruits has arrived at the FBI Quantico Base for training. They are the best, the brightest and the most vetted, so it seems impossible that one of them is suspected of masterminding the biggest attack on New York City since 9/11.” Excited for this one! I’m happy to see Jake McLaughlin in another show after Believe was sadly cancelled. Coming sometime in the 2015-16 season.

A woman is discovered in Times Square naked with no memory of how she got there, with the only clues from her past being the tattoos all over her body. I loved Jaime Alexander as Lady Siv in the Thor movies, so I am extra excited that she got her own show! Reminds me of The Blacklist (one of the all-time favorite shows) with a role reversal. Highly anticipated! Debuts in Fall 2015.

John Stamos and Josh Peck star in a show about an aging bachelor who finds out he not only has a son, but a granddaughter as well. Looks super, super cute. Will definitely be tuning in with my sister! Coming Fall 2015.

Another show from the world of DC Comics, Supergirl is bound to be good. Focuses on Superman’s cousin, Kara Zor-El and her embracing her powers. I love comic-to-tv adaptions. This Fall on CBS.

I don’t normally stick to medical dramas (gave up on Grey’s Anatomy, Private Practice, and House, M.D.), with the exception of Emily Owens, M.D. (a one season wonder). But this trailer gave me chills and made me laugh. So I will definitely be watching. “In the new medical drama Code Black, Angels Memorial Hospital is the busiest ER in the nation. A ‘code black’ occurs when there are more patients than resources, and you’re either praying for a miracle or performing one. This Fall on CBS.”

A comedy starring Rob Lowe (Parks & Recreation) who plays an actor who plays a lawyer, but decides to become a real one when the long-running show ends. Was that confusing? Hm. Just watch the trailer. 😉 Fall 2015.

“She may be crazy. She may be inappropriate. But like an angel, she is always there for you…whether you like it or not. Emmy Award winner Jane Lynch and Maggie Lawson star in the new comedy. This Fall on CBS.” Trailer made me laugh, plus I like the actors. So obviously I’ll be watching. 🙂 Coming Fall 2015.

I’m a big fan of Bradley Cooper, which is why it’s surprising that I haven’t seen his movie Limitless yet. Knowing the movie is going to continue on television pushes it to the top of my to-be-watched pile. Plus I loved the main guy in Manhattan Love Story! “Based on the 2011 feature, Limitless follows Brian Finch as he discovers the power of the mysterious drug NZT. In this new drama from executive producer Bradley Cooper, explore what happens when a man unlocks his limitless potential. This Fall on CBS.”

“Centers on a disillusioned suburban doctor who, while still dealing with the emotional effects of his daughter’s death, unexpectedly becomes a vigilante hero when he intervenes in a drive-by shooting, saving a young boy’s life.” Premieres June 18th. Yay! Another good summer show.

“For those with special abilities, a new era awaits.” Honestly, I was never a huge fan of the original Heroes show. BUT, I’ve been a fan of Zachary Levi since Chuck. I’ll try it out because of him! Coming soon to NBC.

“An epic Biblical saga of faith, ambition and betrayal as told through the eyes of a battle-weary king, a powerful and resentful prophet and a resourceful young shepherd on a collision course with destiny.” I really enjoy biblical dramatizations (like The Red Tent!) even though they are not at all accurate. This one looks like it’ll be epic. Sundays this fall.

“Billy and Cody Lefever dream of a new life and move to ‘The Bakken’ in North Dakota, booming after the biggest oil discovery in American history. They’re soon pitted against a ruthless tycoon who forces them to put everything on the line, including their marriage.” Looks like Dallas or Vegas! Sundays this fall.

“MINORITY REPORT follows the unlikely partnership between a man haunted by the future and a cop haunted by her past, as they race to stop the worst crimes of the year 2065 before they happen.” I believe this is based off the Steven Spielberg film of the same name. Fall 2015.

“Welcome to THE FRANKENSTEIN CODE, a modern reimagining of the Mary Shelley classic, about a man brought back to life by two scientists playing god.” Coming to FOX in 2016.

Well, that’s it! Finally. Lots of new shows to choose from coming (mainly) in the fall. Did any of these trailers interest you? What are you most looking forward to watching? Thanks for reading!

Trailer Tuesday
Author Interview & Giveaway: Jennifer Hartz
Book Emoji Tag
20 Things You Might Not Know About Me
« REVIEW: What She Left Behind by Tracy Bilen
Cream Cheese Kolachky »