Description:
“Run. That’s what instinct told me. But in order to save the secrets of my people and to protect my brother I have to become the enemy.”

There are two kinds of people in the land of Marlenia. The Marlenians, who live on the surface, and the Freetors, who are forced to live underground. The war between them ended two hundred years ago, but the Freetors still fight for the right to live under the sun. Fifteen-year-old Kiera Driscoll embodies the Freetors’ hopes as the Violet Fox. In a violet cape and mask, she sneaks around Marlenia City stealing food and freeing her people from slavery.

Then the Elders task her with a secret mission: retrieve a stolen tome that contains the secrets of Freetor magic, something the Marlenians both fear and covet. Kiera must disguise herself as a noblewoman and infiltrate the Marlenian castle before the Freetor-hating Advisor finds out her real identity, before her brother is imprisoned because of the secrets he hides, and before she falls any more in love with the prince she’s supposed to hate.

My Thoughts:
Keira Driscoll is what they call a Freetor, a people banished by the Marlenians to live underground. At the young age of 6, Keira joins a band of Freetor fighters who steal from the rich and give to the poor. She soon becomes widely and infamously known as the Violet Fox. She believes in freeing her people from the Marlenians who have enslaved them and will do anything to help them. When the leaders of the Freetor’s, called the Elders, ask Keira to infiltrate the Marlenian castle on a secret mission to retrieve an ancient Freetor book, she jumps at the chance to once again give aide to her people. What she doesn’t expect is to sympathize with certain Marlenians, one of whom is the handsome Prince Keegan. Disguised as a Northern Marlenian lady named Dominique, Keira can’t help but feel drawn to the kind prince. Will she really be able to do whatever her mission entails, or will she follow her heart?

Though The Violet Fox had a rocky start, I ended up really enjoying this intriguing young adult novel. It had a great set-up, with detailed backgrounds to this fantasy world that really added to the story. It contained castle intrigue, secret identities, handsome royalty, forbidden romance, a spunky heroine, fast-paced adventure, and a fairytale-like plotline that excited me to the very end. However, there were some aspects I didn’t enjoy. Before I get to that, I do want to mention that all readers have different likes/dislikes and this is only my personal opinion. What works for me could be a thumbs-down for you and what I didn’t like could be your favorite part of the book. That being said, I really didn’t like Keira. I thought that while she was certainly a kick-butt heroine with lots of spunk, she was also extremely childish and annoyingly arrogant. I thought that the relationship between her and Keegan could’ve been focused on a little more, instead of her just falling out of her head in love with him. My biggest aversion to this book however was not the characters or relationship developments, it was actually the unneeded use of magic. I really don’t like any books involving magic, but unfortunately I didn’t know that was a big sub-plot when I decided to read it. With that being said and without saying too much, I do want to add that this book had a really great ending filled with twists and turns, heartache and triumph. Overall, I enjoyed The Violet Fox and would like to continue Keira and Keegan’s story in The Silver Spear.

Even though I wasn’t too happy with several aspects to this book, I know that it will reach it’s intended audience and hopefully succeed! Recommended for fans of light fantasy, adventure, or dystopian novels, The Violet Fox was an intriguing read and definitely one of the most unique I’ve read this year.

**I received this book from the author in exchange for my honest review. My sincerest apologies to the author for my delay in reviewing.

Clare C. Marshall is crowdfunding for the release of her second book in this series, The Silver Spear! If you enjoyed The Violet Fox and would like to participate, click on the link below. 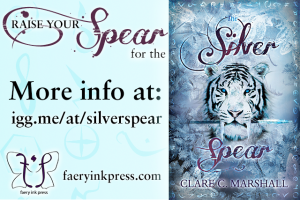 Thanks so much for reading and please leave a comment! What did you think of this book? What is your current read?