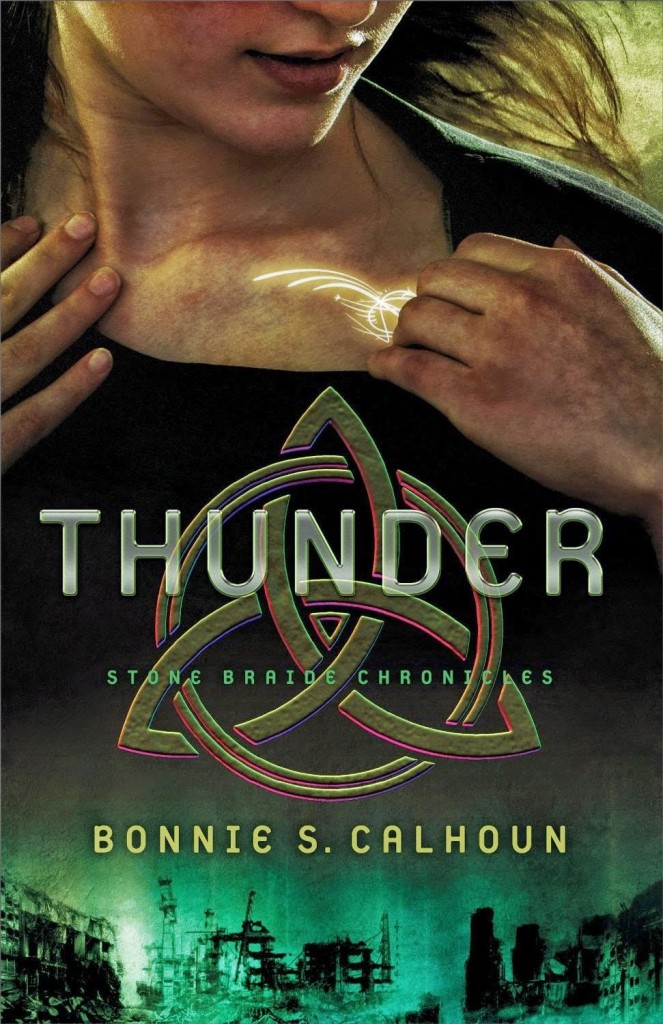 The Time of Sorrows is long past. The future of Selah and her people is shrouded in mystery. And the clock is ticking.

Hidden in the tall grasses along a shore littered with the rusted metal remnants of a once-great city, a hunter crouches. It is the eve of her eighteenth Birth Remembrance and high time she proves to herself and her brothers that she can stand on her own two feet. Selah Rishon Chavez waits not for game but for one of the small boats that occasionally crash against the desolate shoreline. Because inside one of these boats she will find her quarry–a Lander. These people from an unknown land across the ocean are highly prized by the Company and bring a good price–especially if they keep the markings they arrive with. Everything falls to pieces when the Lander whom Selah catches is stolen by her brothers, and Selah wakes the next morning to find the Lander’s distinctive mark has appeared on her own flesh. Once the hunter, Selah is now one of the hunted, and she knows only one person who can help her–Bodhi Locke, the Lander her brothers hope to sell in the Mountain.

With evocative descriptions of a strange new world that combines elements of disturbing scientific advances, devious political conspiracy, and survival in a hostile wilderness, Bonnie S. Calhoun weaves a captivating tale of a society more like our own than we may want to admit. From the tension-laced first scene to the captivating last page, Thunder is an epic journey into the heart of humankind that explores how far we are willing to go when we’re pushed to the limit.

My Thoughts:
One hundred and fifty years after nuclear war nearly destroys America, society has changed dramatically. The marked people who mysteriously arrive by boat from an unknown land, called the Landers, are hunted and sold by the unmarked to the powerful people who live in the Mountain. On the eve of her eighteenth Birth Remembrance, one girl named Selah Rishon Chavez wants to prove to her father and brothers that she can hunt and provide just as well as they can… so she decides to hunt Landers instead of her usual game. She manages to capture a handsome Lander named Bodhi Locke, but things take a turn when her brothers step in and take credit for the catch. To make matters much worse, the next morning Selah finds that the Lander’s mark has now been engraved on her collarbone. Now among the hunted, Selah is forced to leave her home and sets out to find answers the only place she can—the Mountain.

I dove into this young adult dystopian novel with a lot of excitement, as it was one of my most anticipated reads from 2014. It ended up being so completely different from what I thought it was going to be (the synopsis really doesn’t give you a good picture of the story). Though confused at first, all it took were a few chapters to really start getting into Thunder’s whole new world. It introduced landers, the Presence, mysterious lands, the Company, Mountain Men, and post-apocalyptic America pretty well for such a short span and it was really interesting. Fun fact about this book—there were so many similarities I noticed between this story and one of The CW’s tv shows, The 100. The “grounders” in that show were just like this book’s “landers” and the Mountain Men in both were also very similar! I love The 100, so this similar storyline was right up my alley.

While the story was unique and enjoyable, there were a few things that held me back from loving it. The writing was a little rough around the edges at times, in my opinion. The dialogue was especially hard for me, because the characters would say so much more than needed that it ended up being too unrealistic. Speaking of the characters, they were also a little difficult to like. Selah was naive and, frankly, a bit whiny. While I did like Bodhi and twelve-year-old Amaryllis, my dislike for the main character prevented me from fully enjoying the adventurous plot.

Overall I thought Thunder was an exciting start to what I know will become a great series. I appreciated that the book ended on a good place, with no real cliffhanger but enough questions to anticipate the next. If you enjoy immersing yourself into a new world with young romance, fast-paced adventure, and interesting plot-lines, you should definitely try this first book in the Stone Braid Chronicles!

**I received this book free from the publisher in exchange for my honest review. My sincerest apologies to Revell and the author for my delay in reviewing.

Have you read Thunder? I’d love to hear any thoughts in the comment section below!

REVIEW: Destined for Doon by Carey Corp & Lorie Langdon
REVIEW: A Moment in Time by Tracie Peterson
REVIEW: Chivalrous by Dina L. Sleiman
REVIEW: So Not Happening by Jenny B. Jones
« REVIEW: Hidden Agenda by Lisa Harris
REVIEW: The Daughter of Highland Hall by Carrie Turansky »