You are here: Home / Book Reviews / REVIEW: Price of Privilege by Jessica Dotta 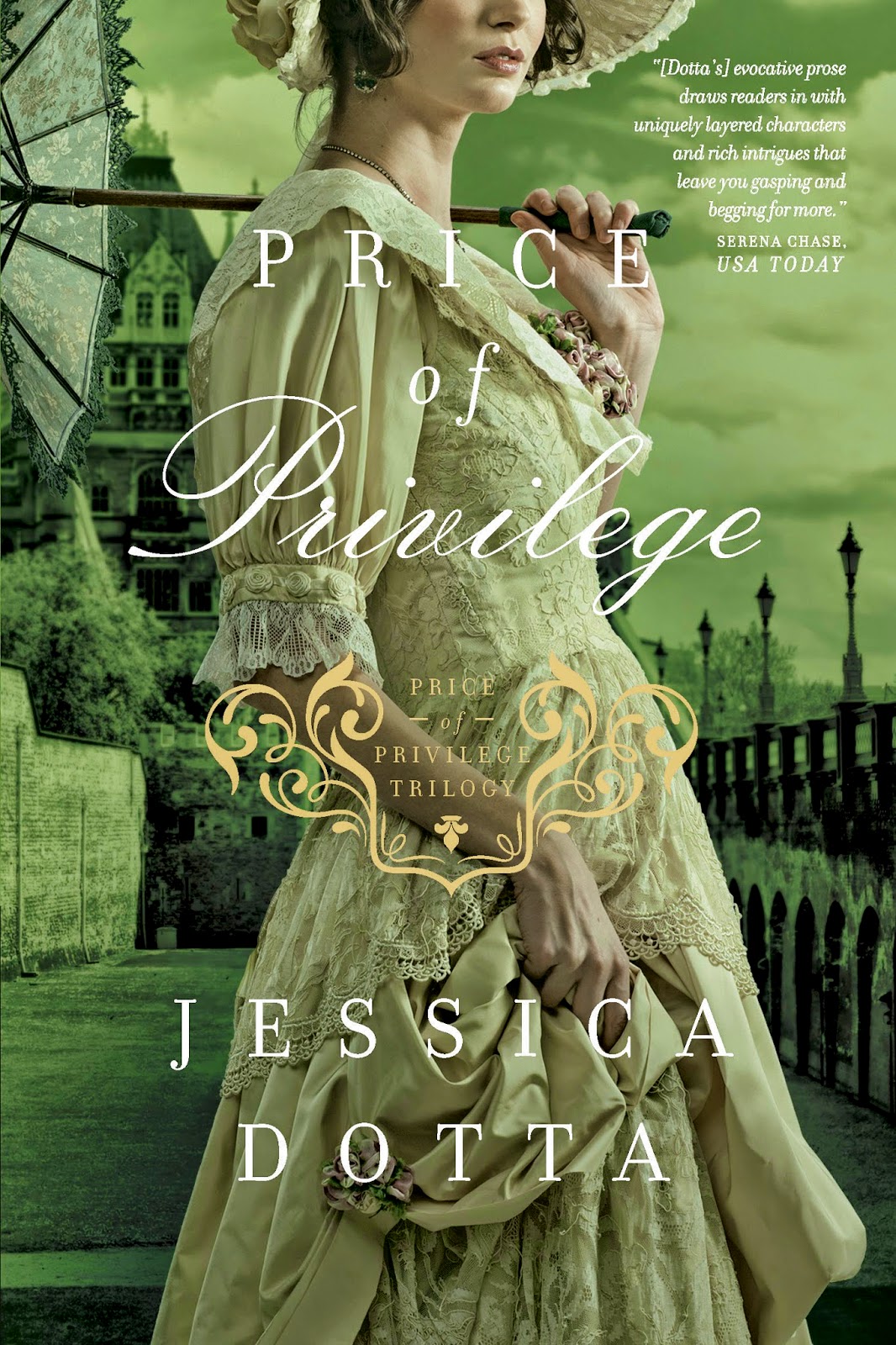 Having finally discovered the truth of her birthright, Julia Elliston is determined to outwit Chance Macy at his own game. Holding a secret he’d kill to keep, however, is proving more difficult than she imagined.

Just when Julia thinks she’s managed to untangle herself from Macy’s clutches, he changes tactics with a risky ploy. As the scandal of the century breaks loose, drawing rooms all over London whisper what so far newspapers have not dared to print: Macy’s lost bride is none other than Lord Pierson’s daughter—and one of the most controversial cases of marital law ever seen comes before Victorian courts.

Though Julia knows Macy’s version of events is another masterful manipulation, public opinion is swaying in his favor. Caught in a web of deceit and lies, armed only with a fledgling faith, Julia must face her fiercest trial yet.

Before I tell you what this book is about, I have to say- I have never been so emotionally traumatized by a fictional story in my life. Right now, I am sitting here with a pint of ice cream, cookies, and chocolate trying to eat my feelings away. Though hands down one of the best series I’ve ever read, I don’t even know if I can recommend them to anyone lest they feel as bad I do at this very moment. I’m also not sure I can properly explain/review this book, but I will do my absolute best to avoid any kind of spoilers, because if you do read this beautiful series it deserves to be read right.

After the events of Mark of Distinction, Julia Elliston finally feels that she has broken free from the controlling clutches of powerful Mr. Macy. She steps on a path towards healing, but still holds the worry that the information she holds over Macy may one day cause more harm than good. Her worst fear takes place when their secrets are unleashed and everyone discovers that Julia, the Emerald Heiress, is the elusive wife of Mr. Macy. Julia’s newfound faith is tested once again when she faces all of London in one of the most controversial marital cases ever to come across Victorian courts. Who will she turn to? Who can she trust?

Unlike books that simply tell a story, these books delve into the inner nooks and crannies of the human heart, fiercely focusing on real emotions and not just the outside tale. Even with the first three-quarters of this book being slower paced (to the point of being a little boring at times, but please don’t give up on it!), it truly focuses on Julia’s emotional journey which was something that made it more realistic. I experienced a myriad of different feelings alongside Julia- heartbreak, hope, confusion, fear, elation, grief, etc. Maybe that’s part of the reason why even though this book is fictional, it hit me so hard.

To say that the Price of Privilege series is a fictional masterpiece is an understatement.

I don’t even think that it was Julia’s story in particular that made this series so great (though passionate, fierce Edward and loving, steady Isaac certainly contributed); it was the author’s pure talent and ability to draw the reader so fully into the world she’d created. There’s something almost magical about Dotta’s lyrical writing (I’m convinced she could write about Old MacDonald having a farm and it’d be beautiful) and I look forward to anything she might write in the future, but I’m also a bit tentative of reading anything else from her because I fear that emotionally I couldn’t handle another ending like this. Speaking of the ending, this was perhaps my one and only disappointment with the series as a whole, though it was still wonderfully told. I will say nothing else about it except this – no matter how tempted you feel by the semi-slow pace at the beginning, DO NOT TAKE A PEEK OF THE END OF THIS BOOK.  If you’ve read this conclusion already, you’ll know what I mean.

Let’s talk about the characters for a moment- one of my favorite parts of this book was the addition of Jameson to this already stellar character ensemble, who sprinkled a bit of lightheartedness to an otherwise very serious book. I simply adored him. If there’s anything else I’d want to add, it’d be that I strongly suggest that you read these books one after the other! I re-read the first two before tackling this one and boy am I glad I did.

Ending this book now, I finally understand why my sister so adamantly urged me to read this conclusion as soon as possible. It is a truly remarkable (albeit heartbreaking) trilogy, with beautiful characters, an alluring setting, and daring plotline. Excuse me now while I go cry some more and attend to my melting ice cream.

Have you read this trilogy yet? If so, what did you think of the conclusion?

REVIEW + GIVEAWAY: A Daring Sacrifice by Jody Hedlund
REVIEW: A Worthy Pursuit by Karen Witemeyer
REVIEW + GIVEAWAY: Her One and Only by Becky Wade
REVIEW: A Matter of Heart by Tracie Peterson
« REVIEW: Dauntless by Dina L. Sleiman
REVIEW: Pretty Crooked by Elisa Ludwig »