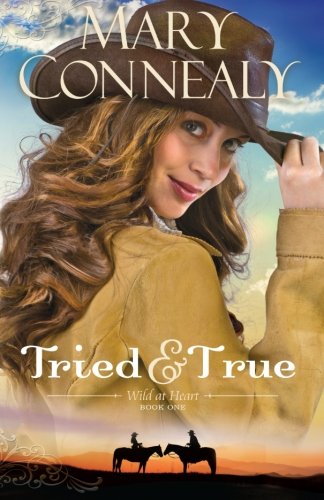 Saddle up for a wildly fun ride with the Wilde sisters!

Kylie Wilde is the youngest sister—and the most civilized. Her older sisters might be happy dressing in trousers and posing as men, but Kylie has grown her hair long and wears skirts every chance she gets. It’s a risk—they are homesteading using the special exemptions they earned serving in the Civil War as “boys”—but Kylie plans to make the most of the years before she can sell her property and return to the luxuries of life back East.

Local land agent Aaron Masterson is fascinated with Kylie from the moment her long hair falls from her cap. But now that he knows her secret, can he in good conscience defraud the U.S. government? And when someone tries to force Kylie off her land, does he have any hope of convincing her that marrying him and settling on the frontier is the better option for her future?

My Thoughts:
Kylie Wilde and her two sisters, Bailey and Shannon, were pressured by their underhanded father to fight in the Civil War dressed as men. The war may be over, but the charade continues because their father convinces them all to homestead using a service exemption they earned during the war. Kylie, unlike her sisters, hates pretending to be a man and decides she’ll move back east as soon as her exemption years are over. Enter Aaron Masterson, local land agent. When Aaron discovers that Kylie is really a woman, he doesn’t know whether he can in good conscience lie to the U.S. government. At the same time he doesn’t want to do anything to hurt the vivacious Wilde sisters. Add to that someone is trying to run Kylie off her land…and Aaron soon realizes that he would do anything to protect her—including marriage. But will Kylie be able to let go of her dreams of luxury back East and instead settle down with Aaron in the place she despises?

If I remember correctly, Mary Connealy’s Petticoat Ranch was my first experience with a christian romantic western. You could say it ruined me for life (or at least rid me of many a good night’s rest), because ever since then I’ve become slightly obsessed with the genre. Connealy’s witty historical romances are some of my all-time faves and her new series, Wild at Heart, is off to an awesome start with Kylie and Aaron’s story. From the moment Aaron met the Wilde girls he was a complete goner…and I LOVED it. I guess you could say that’s due to my cheesy romantic side, but c’mon. Who could deny the cuteness factor of this book?! Watching Aaron get roped into helping the Wilde sisters and sucked into their little family was just about the cutest thing I’ve read for a while. I laughed out loud so many times from the hilariously witty characters. While all the characters were relatable I saw myself most in Shannon. I’m really excited to read the next book in the series, Now and Forever, written from her POV. A few other words I would use to describe Tried & True—adorable, hilarious, cute, witty, romantic, cute, suspenseful, fast-paced, and did I mention cute?

If you’re a fan of authors such as Jen Turano, Karen Witemeyer, Regina Jennings, Robin Lee Hatcher, or Tracie Peterson to name a few, you should definitely try out Connealy’s latest as well as her other series. I am very happy to add Tried & True to my bookshelf…hands down it’s a keeper!

**I received this book from Bethany House Publishing in exchange for my honest review. All thoughts are completely my own.