When I first spotted this recipe, all I could think was something like, “Oh my gosh. Must try. Right now.” My two favorite desserts in the world are cinnamon rolls and cheesecake. Put those two scrumptious desserts together? Absolute genius.

In addition to it being a genius idea, this recipe is fairly simple. The cinnamon rolls are quick and the cheesecake is even quicker.

So what does this amazing creation taste like? Think a cinnamon roll with tons of thick cream cheese frosting slathered on. It’s incredible.

Warning: You cannot overbake this cheesecake. Trust me from experience, even if the cake is wobbly– take it out of the oven! You will end up with dry cinnamon rolls if you try to cook the cheesecake too much. The cheesecake will harden as it’s cooling. 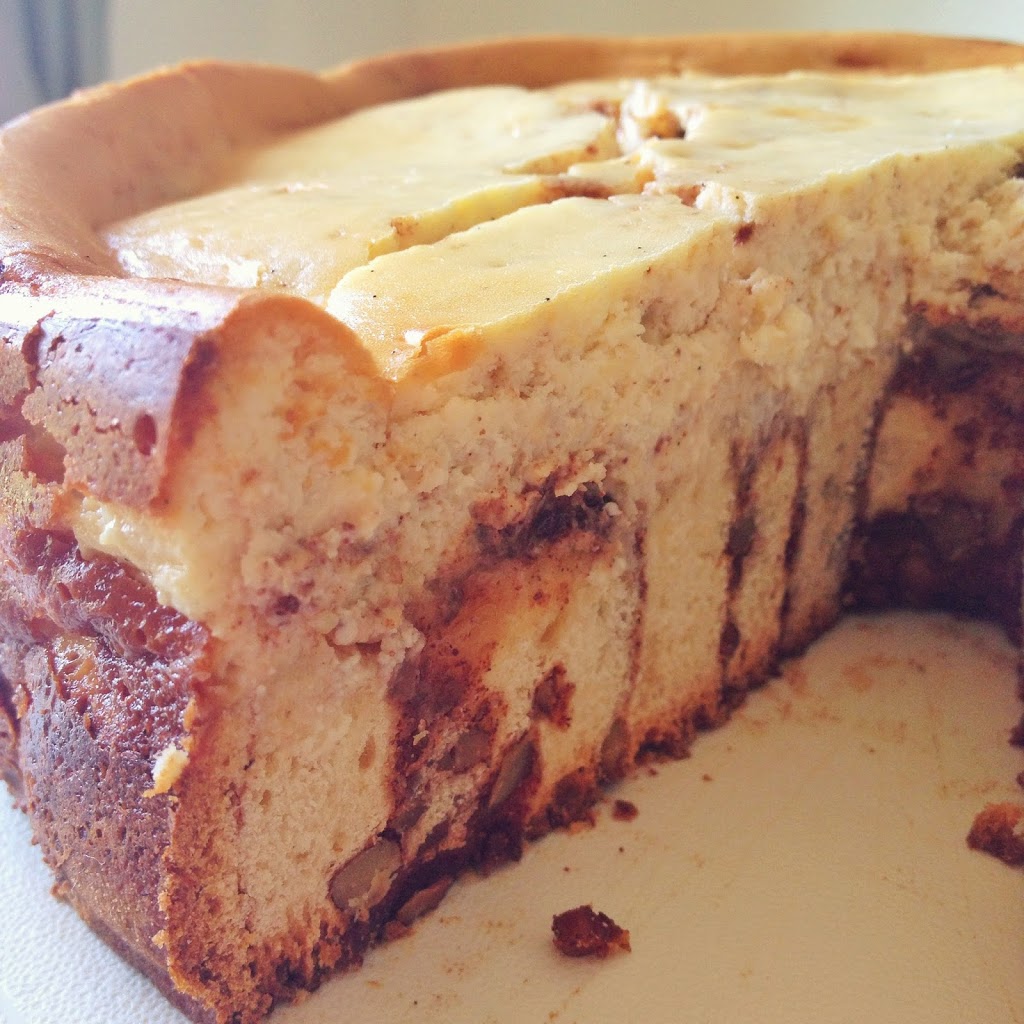 Add the warm milk and the instant yeast to a stand mixer bowl. (If you are using active dry, then let it sit for about 5 minutes until yeast is activated). Add the egg, butter, coconut oil, salt, sugar and flour.

With with dough hook, beat on low for 2 minutes until the dough is combined and forms a ball. Then let the dough hook knead the dough on medium speed for about 6-7 minutes. Cover the dough and let it rise in a warm place until doubled in size, about 30-60 minutes.

Roll out the dough into a 10×20 rectangle. Spread 3 tablespoons of butter over it. Sprinkle brown sugar and cinnamon over the top, then pecans, and roll it up like a jelly roll. Cut it into about 1 inch slices and press them into the bottom of a 10.5 inch springform pan that is sprayed with cooking spray.

For the cheesecake: In a stand mixer, mix the cream cheese, eggs, sour cream, sugar and vanillas. Beat until smooth and creamy, about 3 minutes.

For the cinnamon filling: In a bowl, stir together the butter, brown sugar and cinnamon.