You are here: Home / Book Reviews / REVIEW: The Secret to Letting Go by Katherine Fleet 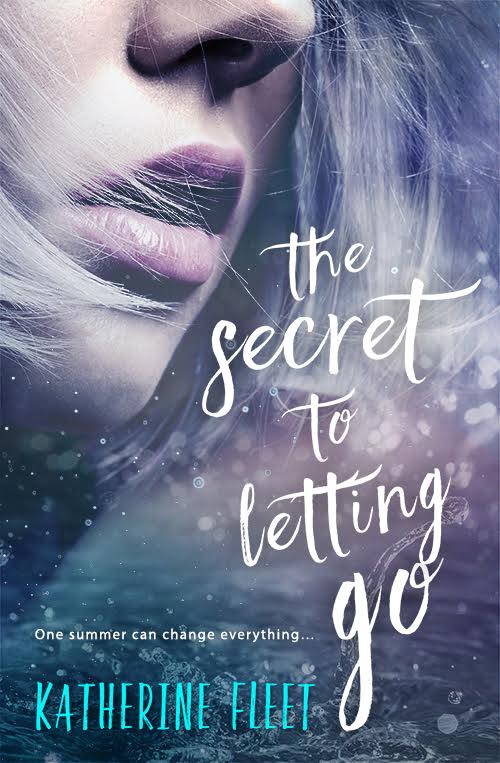 Haunted with guilt after his girlfriend’s death, Daniel Hudson has no interest in committing to anyone. At the end of the summer, he’ll be leaving Florida for a new start in college. If only he could avoid the mysterious new girl in town, who seems every bit as naive and eccentric as she looks. Trouble is, she’s hard to ignore, with her beautiful piercing eyes, pitiful-looking dog, and unsettling tendency of finding trouble. Clover Scott lived her whole life off the grid and arrives on the Gulf coast in search of her grandparents. She never expected to nearly drown, or get caught in a hurricane, or fall in love with the boy who rescues her. Now, she has a chance to rewrite her life’s story, to finally fit in somewhere, but Daniel wants answers about her past. When the police start asking questions about the disappearance of her parents, she must make a choice: go to jail or confess her secrets-even if they might destroy her chance at a happily-ever-after.

Let me start by saying that this book was not what I expected in the least. Maybe I missed parts of the synopsis when I was too busy admiring the gorgeous cover, I don’t know. *shrugs* Somehow I thought I was going into a light YA with a dash of suspense, but what I got was…entirely different.

Daniel Hudson doesn’t let himself get close to anyone, not since his girlfriend died tragically and the guilt still haunts him about whether or not he could’ve saved her. The last thing he needs is to meet a girl who constantly needs saving, be it from the drowning in the ocean or an approaching hurricane. But Clover Scott is different from most girls, and he knows it and can’t seem to stay away. Clover has been through alot in her short life. She grew up very sheltered and in an unstable environment. So when she ends up in Florida searching for grandparents she’s never met, homeless and alone, she doesn’t expect to fall in love with the boy who is constantly saving her. But the secrets of her past come at a cost – will she be able to move on from her past and tell the police, and Daniel, the truth?

Told from the perspectives of both Daniel and Clover in parts (starting with Daniel), this book had me surprised at every chapter. I honestly didn’t even know how I felt about it until I was about halfway in! Clover had a genuine and simplistic outlook on life that made her childlike and it was endearing. Daniel could be a little infuriating at times, but you can understand why and his feelings for Clover were beyond cute. Their relationship was romantic, but the message of finding yourself before diving into a serious relationship was realistic and well done. I appreciated the fact that the initial secrets Clover kept weren’t revealed only in the last two pages, like a lot of books I’ve read in the past. The author did a really nice job with giving us a well-rounded, complete story. And I just found out that this is her debut YA novel, which is amazing!

At first, I felt like I wasn’t getting any real depth from the main characters and it ended up coming off more distant than it could have been. BUT, the last half of the book was so much better than the mysterious nature of the first – the characters started showing growth and secondary characters like Amelia and Henry were the backbones of the story and made me smile. By the end, the warm sense of family and belonging that Clover experienced was enough to bring tears to my eyes and make me feel all gushy inside.

Emotional and genuine, Daniel and Clover’s story of young love amidst chaotic circumstances is sure to pull at your heartstrings. Such a fantastic debut YA from this new author! If you’re looking for a YA different from the “norm” then you should give The Secret to Letting Go a shot. Not what I expected, and I can confidently say that it’s a very good thing!

*I received this book from the publisher and NetGalley in exchange for my honest review.

{Content Warning: This book contains very serious and heavy subject matter. Clover’s past involves murder and terrible family circumstances including abuse. Daniel’s girlfriend committed suicide, but the reader doesn’t know any details other than how it affected the characters. No profanity or other inappropriate content (other than a kiss here and there and talk of “hanky panky”) but the thematic material makes me think it’s more appropriate for ages 14 and up.}

Don’t miss the release for The Secret to Letting Go on February 1st! Isn’t that cover gorgeous?! Have you guys heard of this debut YA? Are you interested in checking it out? What are some of the YA’s on you to-be-read list for 2016? Have any good current reads to recommend? Thanks for visiting Will Bake for Books! ♥

REVIEW: Red Queen by Victoria Aveyard
REVIEW: The Preacher's Wife by Brandi Boddie
REVIEW: Chivalrous by Dina L. Sleiman
REVIEW: An Uncertain Choice by Jody Hedlund
« 2015 Releases I Meant To Get To But Didn’t
Fruity Pebbles Cookies with Milk Frosting »