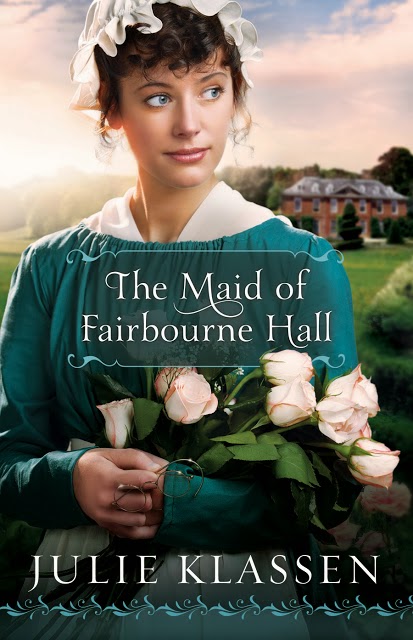 Description:
Margaret Macy flees London, disguised as a housemaid, to avoid marriage to a dishonorable man. If she can remain unwed until her next birthday, she will receive an inheritance, and with it, sweet independence.
But she never planned on actually working as a servant. And certainly not at Fairbourne Hall—the home of two former suitors. As she fumbles through the first real work of her life, Margaret struggles to keep her identity secret. When a trap is set to force her from hiding, will love or danger find her first?
My Rating: ✰✰ (2 out of 5 stars)
My Thoughts:
I was really excited to read another Julie Klassen, The Silent Governess happens to be my favorite regency book. So I read The Maid of Fairbourne Hall with pretty high expectations, which is probably one of the main reasons I was a little disappointed.

The story sets off when Margaret Macy, a pampered and self absorbed young woman, overhears malicious plans of forced marriage between her and her stepfather’s pompous nephew for her grand inheritance, to be received on her next birthday. In fear she runs away with her maid only to find herself destitute and in desperate need of a job. Due to a coincidental meeting, she gets a job as a housemaid at Fairbourne Hall which happens to be the home of the very man she rejected years earlier. Disguised, she goes by undetected for as long as she possibly can but will her old love recognize her? And what repercussions will she have to face for decisions of the past?

I enjoyed reading about Margaret’s charade and slowly learning bits and pieces of her old life. You get to see the very different perspectives of the maids and the ladies. You gradually like Margaret more and more and by the end of the book her attitude and character is completely changed for the better.

The one big problem that I had with this book is that the ending fell FLAT. It was like this long, dramatic story leading up to the finale and then…no bang, no spark, no anything! There was all this suspense due to the evil stepfather and then nothing really came out of it. It was just over. Despite the ending, I did enjoy the story and probably would recommend it as a pretty good regency novel. It had so much potential, but it just wasn’t great.