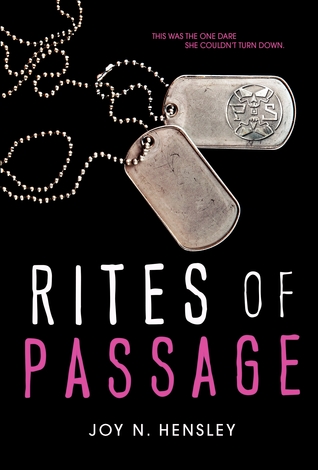 Description:
Sam McKenna has never turned down a dare. And she’s not going to start with the last one her brother gave her before he died.

So Sam joins the first-ever class of girls at the prestigious Denmark Military Academy. She’s expecting push-ups and long runs, rope climbing and mud crawling. As a military brat, she can handle an obstacle course just as well as the boys. She’s even expecting the hostility she gets from some of the cadets who don’t think girls belong there. What she’s not expecting is her fiery attraction to her drill sergeant. But dating is strictly forbidden and Sam won’t risk her future, or the dare, on something so trivial . . . no matter how much she wants him.

As Sam struggles to prove herself, she discovers that some of the boys don’t just want her gone—they won’t rest until she gives up. When their petty threats turn to brutal hazing, bleeding into every corner of her life, she realizes they are not acting alone. A decades-old secret society is alive and active . . . and determined to force her out. At any cost.

Now time’s running short. Sam must decide who she can trust . . . and choosing the wrong person could have deadly consequences.

My Thoughts:
Sam McKenna is a military brat who has been through a lot in the past year. Before her brother Amos died, he dared her to be one of the first females to go to the Denmark Military Academy. Sam has never been one to turn down a dare, so as soon as she can she enrolls—much to her mother’s dismay. And if being one of the first girls to go to the prestigious military school wasn’t enough, she also has to contend with the brutal treatment from her fellow cadets, her inappropriate attraction to her drill sergeant, and a decades old secret society that wants her out—by any means possible.

Rites of Passage is a fast-paced, edge-of-your-seat, and intensely exciting YA novel that had me reading late through the night. It had everything I hope to find in this genre—a good balance of suspense, romance, action, drama, and thrill. Sam was a heroine I could really root for. I loved the military aspect…it seemed like a pretty accurate account of military school (not including the added drama and romance because, after all, it is a YA novel) and when I read more about the author I realized why as she herself went to military school on a dare! This book was extremely well-written and easy to read that I had such a hard time putting it down and finished it in one day. If not for certain bad content contained in this book, I would have given Rites of Passage a higher rating as I really did enjoy getting sucked into this thrilling novel.

Reminding me of a more realistic Ally Carter novel, Rites of Passage will have you on the edge of your seat and wanting more. If you are a fan of YA romantic suspense novels, this debut novel from Joy N. Hensley is definitely worth a shot.

{Content Warning: Recommended for ages 15 and up. This book contains several profanities, growing more prominent towards the end. There is intense violence including brutal beatings, attempted murder, and mention of suicide by hanging. The sexual content mainly involves light kissing, but there is a brief bedroom scene where a character walks in on a couple and talk of people “hooking up.”}

What’s your latest YA read? Are you interested in checking out this debut novel?