Happy Tuesday, all. This week’s Top Ten Tuesday topic from the ladies at The Broke and the Bookish was a freebie, so I decided to switch it up a bit and talk about something else I like other than books…tv shows! While I was originally going to list my favorite shows, I decided to only share my favorites from last year as my all-time favorites would need a longer list…much longer. I am, after all, a tv junkie. Plus, 2014 was such a great year for tv. So great in fact that I had a pretty hard time narrowing it down to ten. Hope you enjoy my top picks and I’d love to see your picks as well in the comment section below! 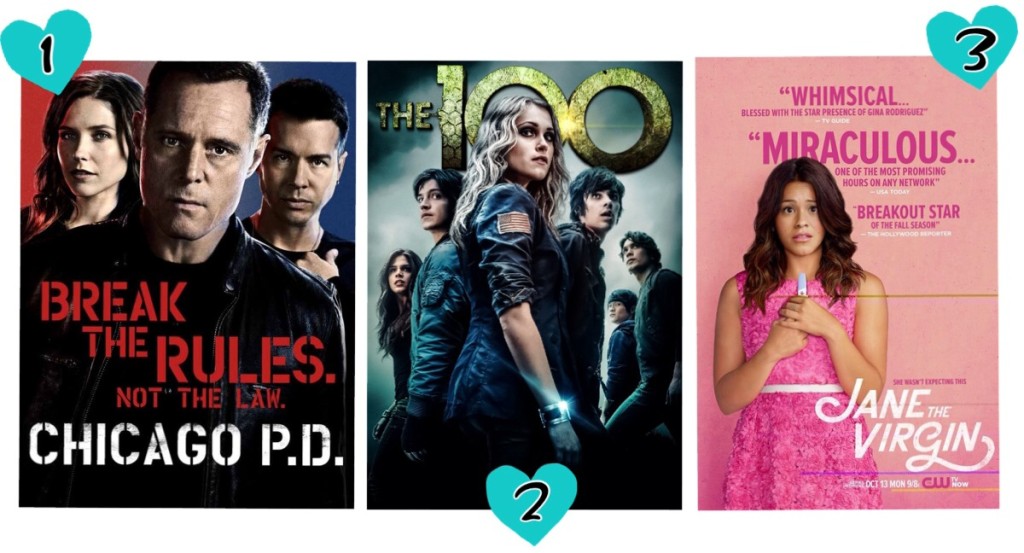 1. Chicago P.D. (NBC)
“Follows District 21 of the Chicago Police Department, which is made up of two distinctly different groups: the uniformed cops and the Intelligence Unit.” -IMDB

This was probably my most anticipated new show of the year, with good reason. I am a HUGE fan of Chicago Fire (Dawsey!!), Sophia Bush is one of my favorite actresses, and I love shows set in Chicago because it’s where I live. It only took the first episode for me to get hooked and I’ve been watching it weekly ever since!

2. The 100 (The CW)
“Set 97 years after a nuclear war has destroyed civilization, when a spaceship housing humanity’s lone survivors sends 100 juvenile delinquents back to Earth in hopes of possibly re-populating the planet.” -IMDB

I was pretty wary of this show, because I usually don’t love The CW–with the exception of Arrow. Too dramatic and teeny bopper-ish. While this is pretty dramatic (not gonna lie), I was totally surprised to find that this show was not only seriously entertaining but also different. Hands down one of my favorites. Plus, I kinda heart Bellamy.

3. Jane the Virgin (The CW)
“A young, devout woman discovers that she was accidentally artificially inseminated.” -IMDB

I know this show sounds a bit strange, but it’s actually hilarious, cute, and fresh. Gina Rodriguez is a talent and the rest of the cast is perfect as well. Set like a telenovela, this show will make you laugh, cry, and sometimes simply shake your head from all the craziness. It’s great. 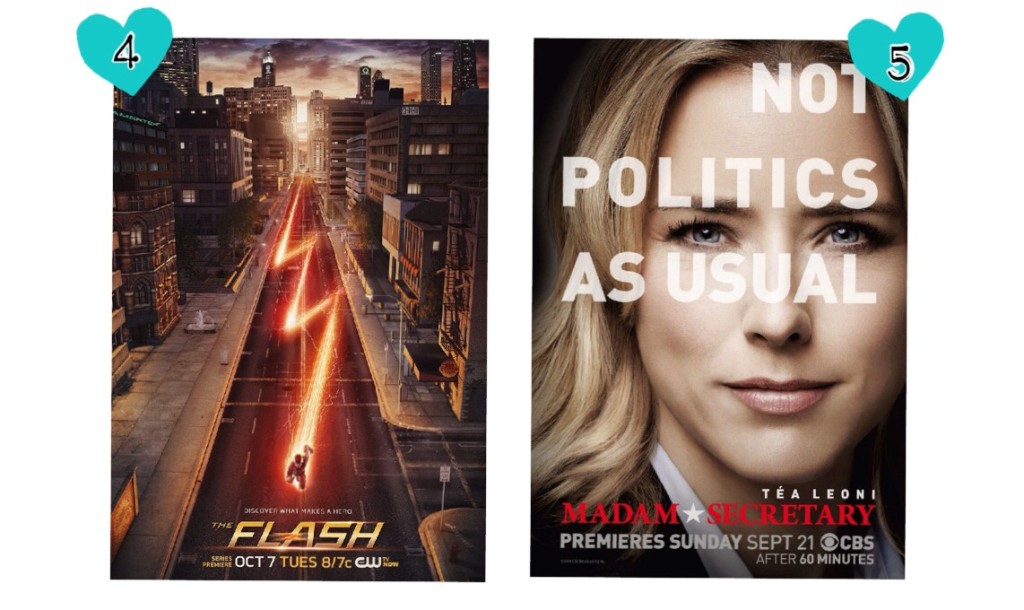 4. The Flash (The CW)
“Barry Allen wakes up 9 months after he was struck by lightning and discovers that the bolt gave him the power of super speed. With his new team and powers, Barry becomes “The Flash” and fights crime in Central City.” -IMDb

Like I mentioned above, I’m an Arrow fan. So this spin-off series simply couldn’t be missed. Unlike the much darker Arrow, this series is light and just plain fun…something I really appreciate. I love that I can watch this show with my little sister. We ship Barry + Caitlin.

5. Madam Secretary (CBS)
“A look at the personal and professional life of a Secretary of State as she tries to balance her work and family life.” -IMDB

If you like shows like The Good Wife or Scandal with strong female leads and a dash of politics, you will love Madam Secretary. Téa Leoni is spectacular as the Secretary of State and her on-screen husband Tim Daly is also amazing. Fun fact–they’re dating in real life. Super cute, right?! But back to the show, every week it just keeps getting better and better. Hopefully they don’t prematurely cancel this show like all the others I love! *fingers crossed* 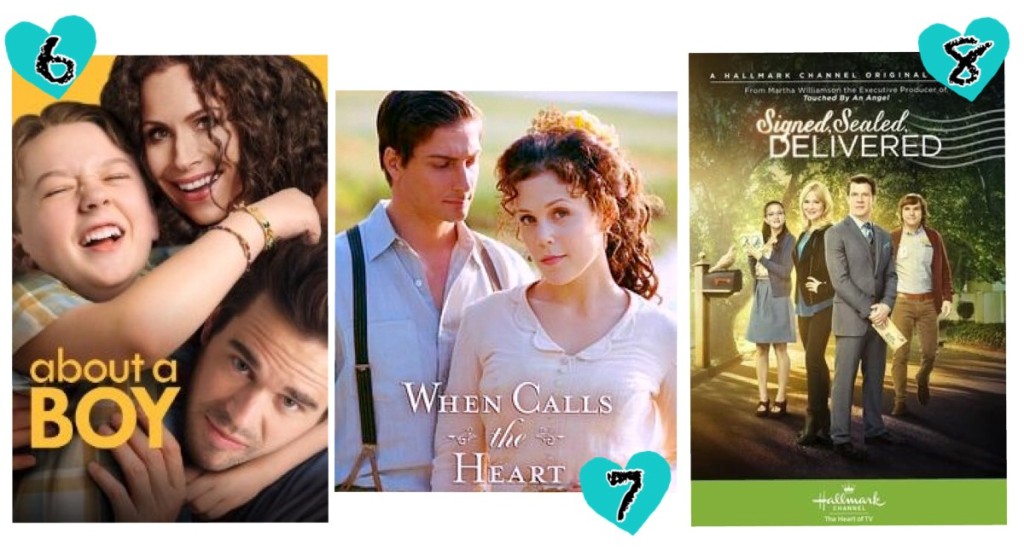 6. About a Boy (NBC)
“Based on the best-selling Nick Hornby novel comes the series About a Boy, a different kind of coming-of-age story.” -NBC

This show = adorable. I mean, it’s literally the cutest show on tv. It never fails to make me laugh, which is why I tune in every Tuesday. C’mon, just look at the cuteness happening in that picture.

7. When Calls the Heart (Hallmark Channel)
“Elizabeth Thatcher, a young school teacher from a wealthy Eastern family, migrates from the big city to teach school in a small coal mining town in the west.” -IMDB

I love Janette Oke. Her books, movies, and now tv shows as well! I had been waiting for this show to premiere for YEARS and when it finally did I was ecstatic…my sisters thought all my excited-ness was really weird. But what can I say? Erin, Daniel, and Lori are perfect. I’m officially a “heartie”…who’s with me?

8. Signed, Sealed, Delivered (Hallmark Channel)
“A group of postal detectives work to solve the mysteries behind undeliverable letters and packages from the past, delivering them when they are needed most.” -IMDB

This show is perhaps the “best” show of the year (content-wise)–not only is it family friendly, but it’s also meaningful, fun, cute, and a really nice change of pace from the usual. I’m a fan. 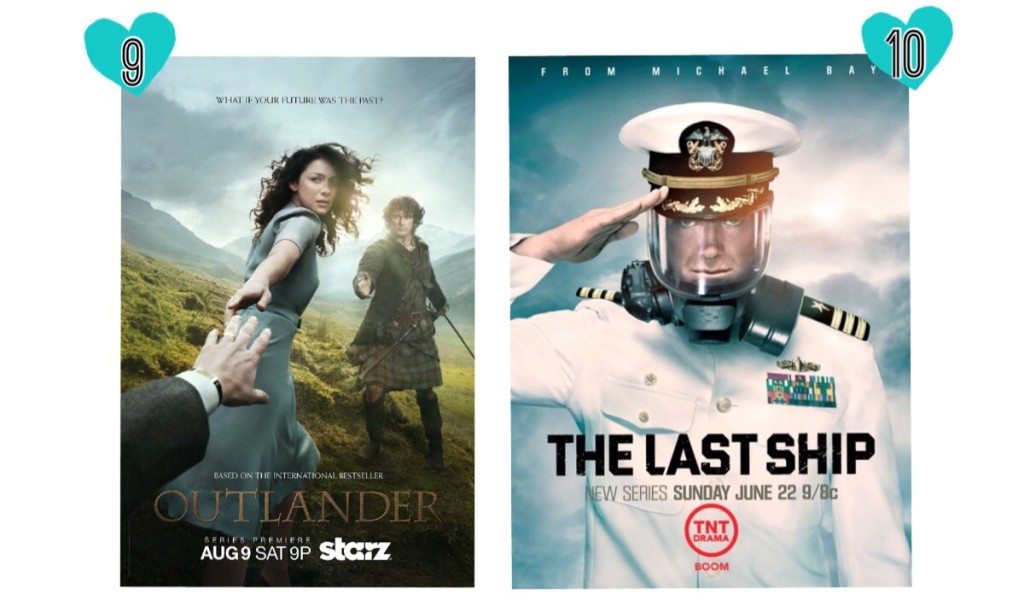 9. Outlander (STARZ)
“Follows the story of Claire Randall, a married combat nurse from 1945 who is mysteriously swept back in time to 1743, where she is immediately thrown into an unknown world where her life is threatened.” -IMDB

Outlander is my guilty pleasure. There, I said it. It has a lot of “iffy” content, if you know what I mean. But it’s also hands down one of the best shows on tv with it’s visually stunning scenery, uber talented cast, and grab-hold storyline that leaves me begging for more. I think I just love book-to-screen things. And time travel. And Jamie.

10. The Last Ship (TNT)
“The crew of a naval destroyer is forced to confront the reality of a new existence when a pandemic kills off most of the earth’s population.” -IMDB

It took me a bit of time to really get into this show, but once I did there was no turning back. The Last Ship is probably the most memorable of the year for me. Eric Dane returns to television as CO Tom Chandler in this nail-biting action drama about a group of soldiers who discover they might be the only surviving ship in a pandemic. I can’t wait for season 2…the first left off on quite the cliffhanger!

So there you have it! The best tv shows that debuted in 2014, in my opinion. Some honorable mentions–Chasing Life, State of Affairs, Selfie, Crisis, Believe, and Stalker. Like I said, I watch too much tv. 😉

What about you? What are your top ten favorite tv shows debuted in 2014? Comment below!