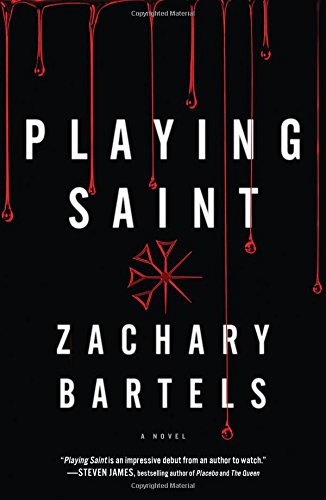 Rising mega-pastor Parker Saint was wrapped up in his ratings and his book deal. But that was before the cops and the serial killer, the Vatican operatives, and the centuries-old plot to conceal an ancient relic. Now he’s just trying to stay alive.

Parker Saint is an up-and-coming superstar pastor on the verge of achieving everything he’s wanted—including a national TV program and major book deal. His success seems all but guaranteed until an angry incident with a flight attendant. To keep his growing empire from collapsing, Parker cuts a deal and agrees to serve as a police consultant on the trail of a twisted serial killer who marks his victims with religious symbols. The problem is, Parker’s anything but an expert, faking his way through the investigation by slipping away to consult his smart phone.

As he is drawn deeper into a web of intrigue involving an obsessive and demanding detective, a trio of relentless Vatican operatives, a string of botched exorcisms, and a centuries-old conspiracy to conceal a mysterious relic, Parker finds himself questioning everything he has been trying so hard to protect.

Building to an intense climax, Playing Saint is a timely exploration of what compels us, what defines us, and what redeems us. With its combination of suspense, humor, and intriguing characters, it will captivate readers until the final twist.

My Thoughts:
Reverend Parker Saint has led a very comfortable lifestyle, with a dream job broadcasting his sermons and writing novels. He’s widely known for his positivity and famous saying, “God is awesome and so are you!” Life is good…or at least until an altercation leaves him with no other choice but to make a deal with the police in order to avoid a public scandal. The deal turns out to be helping a group of detectives solve a series of murders linked only by ominous religious symbols left at the crime scenes. Only problem is, Parker is no expert and his only hope at getting out of his mess is by pretending he is…something he’s gotten quite good at over the years. Add to that some funny secret agent priests and a centuries old conspiracy similar to the Holy Grail, Parker soon finds out that he is in way over his head with more evil forces at play than he can imagine. Will he survive long enough to get his life back on the track it was meant to all along?

A novel not for the queasy, Playing Saint slams us into intense suspense right from the get-go. It pulled me in with it’s entertaining characters, crazily intriguing plot, and just the unique overall “feel” of the story. The writing is spectacularly well done—this is a debut author to watch out for. If you’re wondering why I started with mentioning this book wasn’t for the queasy, here’s why. This story revolves in large part around spiritual warfare, including occult symbols, exorcisms, demonic possession, and evil curses to name a few. There are parts that are absolutely grisly, like crime scenes and the killer’s flashbacks. Speaking of, we get many chapters with different character’s point-of-views—including but not limited to the detective working the case, victims, victim’s families, and the killer himself. I really prefer having a strong focus on the main character, but I do understand why it was important to include other perspectives in this story. However, it did still confuse me at times and was especially difficult to remember everyone and everything going on, especially if you’re the kind of person who doesn’t finish a book in one sitting. These things made the book a little less than it could have been for me…hence the 3.5 stars. I have only one more thing to mention—the ending was explosive. And by that, I mean it was crazy exciting and I couldn’t have stopped reading even if I tried. And that is the sign of a good read.

If you’re looking for something refreshingly different from this genre, this is it. A thought-provoking crime drama, Playing Saint will put you on the edge of your seat with it’s twists and turns and suspenseful mystery. Side note—don’t forget to read the author’s note as it had an impactful message that made the perfect ending.

{Content Warning: This book contains graphic violence, including descriptive crime scenes. Because of this, I do not recommend for those under the age of 16. There is also a minor suggestive nightclub scene.}

**I received this book from BookLook Bloggers in exchange for my honest review. All thoughts are completely my own.